As Belarusian opposition leader Sviatlana Tsikhanouskaya testifies before the Oireachtas Foreign Affairs Committee later today, RTÃ‰ correspondent Paul Cunningham examines a campaign linking political prisoners in Belarus to politicians from all over the world. the EU, including here in Ireland.

“I was really shocked: saddened and shocked by the news.”

Fianna FÃ¡il TD SeÃ¡n Haughey remembers his reaction when he was informed last May that the prisoner he sponsored – Vitold Ashurak – had died in custody.

It was “very suspicious,” he said, emphasizing the “very”.

If anything, that’s an understatement. Ashurak was 50 years old, had no health problems and reportedly died of cardiac arrest.

A disturbing video then emerged in which he looked visibly weak and disheveled as he staggered and then collapsed in his cell.

When his body was returned to his family, Mr. Ashurak’s head was almost completely wrapped in bandages.

He had been an organizer of the opposition party BPK.

Glassblower by trade, he had increasingly focused on politics and challenging the regime of President Alexander Lukashenko.

After last year’s elections, Ashurak was tried for “organizing and participating” in protests, as well as “threat of violence against the police”. He was sentenced to five years in prison.

Lukashenko has held Belarus with an iron fist since coming to power in 1994. Mass protests erupted in the country after his re-election last August – his sixth term.

However, the Organization for Security and Cooperation in Europe said the election was not transparent, free or fair.

The Belarusian opposition claimed to have won. Lukashenko’s response has been to deploy security forces to disperse the protests and to institute a policy of widespread arrests and detentions.

The European Union called last year’s presidential elections in Belarus fraudulent and condemned Minsk for the increased crackdown since then.

The Irish government has called for an independent investigation into the death of Vitold Ashurak, but to no avail.

SeÃ¡n Haughey decided to sponsor a second prisoner – this time journalist Dzianis Ivashyn – who had been jailed for “interference with a police officer”.

But Dublin Bay North TD was going to take another shock – Ivashyn, he was told, also suffered a heart attack while in detention. This one was not fatal.

Mr Haughey told me it was also “very suspicious”, as it appeared that the prisoners “appeared to be in poor health almost immediately after their detention”.

Mr Haughey is one of 29 Irish politicians – DTs, senators and MEPs – who sponsor prisoners in Belarus, as part of a program organized by human rights group Libereco. The campaign, called #WeStandBYyou, is currently supported by nearly 200 parliamentarians across the EU.

Mr Haughey went so far as to sponsor a DÃ¡il motion calling for the release of all political prisoners in Belarus. He told the chamber: â€œTheir only crime was to defend democracy and basic human rights in their country.

Politicians from all political backgrounds here are in favor, with the exception of Sinn FÃ©in, who has yet to explain why.

She told me: â€œThe events in Belarus have a special resonance for me because of my family history – my Czech grandfather took a stand against the Nazis and was also strongly opposed to the Communist regime.

Mr. Bacik sponsors Aliaksandr Tsiareshka who was jailed for more than six years for “participating in riots” after last year’s presidential election.

The former senator said she was inspired by “brave individuals like [Opposition leader] Sviatlana Tsikhanouskaya who defended democratic principles and adhered to authoritarianism “.

When I asked her if sponsorship of a prisoner could have an impact, given the total control exercised by President Lukashenko, she replied: â€œI think it makes a difference when EU lawmakers speak out on this. .

TD Social Democrats Gary Gannon agree. He said to me, â€œWe should all support their cause. It’s a small act on my part, but our silence allows more tyrants like Lukashenko.

He sponsors Siarhei Maushuk who was sentenced to over six years for “participating in riots”.

Mr Gannon believes that if the EU has imposed sanctions on Minsk, it must go further. He thinks that a “more important act” would be to “sanction the oil and fertilizer barons in Belarus who finance and allow Lukashenko’s reign”.

A few political prisoners in Belarus have prominent figures – like Roman Protasevich and Sofia Sapega who were pulled from a Ryanair flight to Minsk.

The forced landing of the plane was described by Foreign Minister Simon Coveney as “state-sponsored air piracy”.

He supports Maksim Pauliushchyk, who was jailed for two years for painting a slogan “We will not forget” on a sidewalk near where a protester was killed.

Senator Ward told me that Belarus is a country he knows well and in which he has spent time. â€œI have a lot of friends there, and Belarusian friends here.

He says he is “extremely” aware of the undemocratic nature of what happened in last year’s presidential elections in which “honest people put their heads above the parapet and were arrested. “.

Senator Ward believes that Ireland can play an important role.

â€œWe are not involved in the kind of geopolitics that other countries in Europe are involved in. I think Ireland is now in a unique position, with a seat on the UN Security Council. hope we would be able to bring some diplomatic pressure to bear. “

Fianna FÃ¡il MEP Billy Kelleher has been very active in this campaign. He said: “Once I heard about Hleb Hatouka’s story, I knew I had to get involved. His treatment by the authoritarian Lukashenko is just disgusting and immoral.”

Hatouka was sentenced to four years in prison for â€œorganizing and preparing actions seriously undermining public order; violence or threat of violence; resistance to a police officer â€.

Mr Kelleher said: “Prisoners and their families need to know that they are not alone – that there are those of us in the EU who stand side by side with them.”

Frances Fitzgerald, MEP for Fine Gael, had a somewhat different experience from other parliamentarians – the prisoner she sponsored was eventually released.

Volha Paulava had been sentenced to three years of house arrest for “organizing and preparing actions seriously undermining public order”.

The MEP said she had supported the sponsorship initiative because “one can only imagine the isolation, fear and terror of being detained under the current circumstances in Belarus”.

She added: “Supporting an activist under these circumstances was like a small gesture that could make a difference.”

Ms Fitzgerald has decided to befriend a second inmate and is waiting to be informed of his identity.

There appear to be a growing number of prisoners to choose from, as Lukashenko tries to silence his opponents.

Spring 96, the Belarus-based human rights NGO and partner of Amnesty International, estimates that there are currently 555 political prisoners held in Belarusian prisons.

Among them, Syarhei Tsikhanousky, who has become a leading figure in mass protests against the regime, and has been in detention since May last year.

His wife, Sviatlana Tsikhanouskaya, who now leads the opposition against Lukashenko and is forced to live in exile, will address the Oireachtas foreign affairs committee today.

Previous Amnesty announced for all IRA and British soldiers 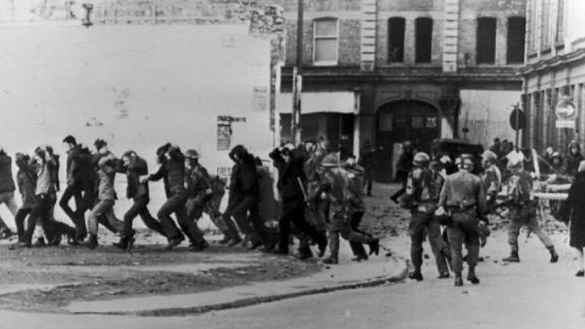